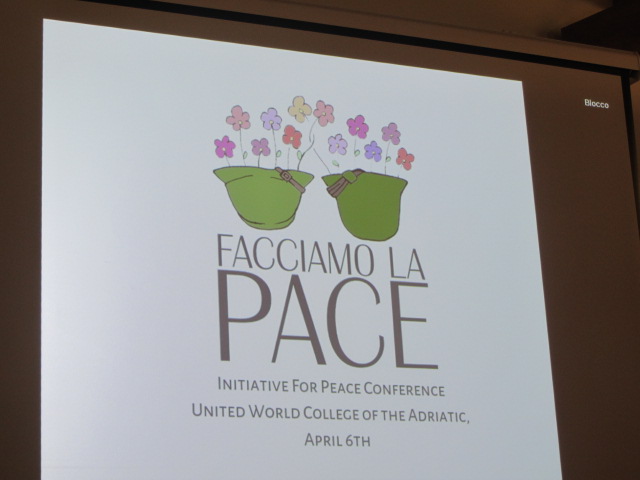 History is full of important dates and years to commemorate and 2019 sticks out as it marks the 100th anniversary of the end of the catastrophe of the First World War that changed everything: territories, borders, identities. The war can also be seen as a “bad practice example” for peace treaties that don’t pacify but mortify.

To get familiar with the history basics, the GIBS students visited the exhibition “Borders” in the Graz Stadtmuseum and produced a film, reconstructing the peace treaty of St. Germain. The meditation room proved to be the perfect location and everybody dressed up for the occasion. The filming and editing took two full days. In March, the UWC students from Duino visted GIBS for four days and both, the Italians and Austrians, got involved in the workshops on Negotiation and Conflict Resolution lead by Dario Salerni and Marta Vuch. During this special week the young people enjoyed Shrove Tuesday in town and became a team, sharing their personal stories from escaping the war in South-Sudan to experiences in Sarajevo.

Keeping the potential of peace treaties in mind, all participants of the project visited the Italian-Austrian and the Lower Isonzo front, the WWI museum that was reopened in 2017 in St. Michele (Museo della Grande Guerra del Monte San Michele) offering an immersive experience thanks to its interactive multimedia tools. You can virtually enter a trench, see the gas, feel the fear and get dizzy in a plane flying over the Isonzo.

The outcome of our work was shared in this Conference for Peace, whose aim was to wrap up a year of collaboration and discovery. Most of us were born to live in peace and war is only present in our history books, but this is only true for a privileged group of people. The past cannot be changed, but we can learn from it and use that knowledge to create a better future.

When we first decided to join the project “Facciamo la Pace” we, and probably everyone else of our school, didn’t exactly know what we were going to do. We just knew it had to do with the first WW, making peace and the relations between the countries in the project.

Since we had a few movie-interested people in our group, we then decided to make a film. We thought of acting out the treaty of Versailles and St. Germain, since we had just covered it in history and because we found it an important moment in the 20th century, when the countries were actually trying to make peace, during all the violence that had occurred and was going to occur. Although the peace only lasted for a few years.

Austria hasn’t been in a war for the past 70 years. Which means we have never witnesses a war and everything that comes with it. When there hasn’t been a major crisis and there has been peace for all of your lifetime, you don’t understand why peace is so pivotal for society.  That’s why we wanted to focus on the time in between the two wars and how it was like to live in Austria at that time.

At the beginning of the year, the first thing we did for the project was an exhibition, that showed us the identity crisis former Austrian-Hungarians had to face after the countries border has been changed. Those people didn’t know anymore, which country they belonged to.

Besides that, inflation and unemployment caused a lot of poverty and hunger. The new and smaller Austria had almost no agriculture, but was mostly working in the tertiary sector, which made it even more difficult for the Austrians to provide for themselves.

After the Austrian army had been massively reduced, many unemployed and wounded soldiers came back from the war without any hope or future. All of those especially the unemployment and unhappiness of the Austrians caused a lot of anger, which later lead to the support of the NSDAP and later Hitler.

So in a way one war a reason for the other one. This should teach us to not make this mistake again in the future and try everything to achieve peace, especially in the countries, which are in conflict.

We didn’t completely understand the importance of peace until we met the students from Duino, that actually came from all over the world and told us their stories and experiences in a war and crisis.

We didn’t fully realize how much injustice still happens in this world; how many young students and children are still so easily affected by the violence in their country.

It was very interesting and eye-opening to discuss about social problems, that you just wouldn’t typically discuss. We might have disagreed on the way of achieving it, but our goal was always the same.

We think this project made us all see, how much influence we as young people can have on the world of tomorrow.

We hope we all will continue to fight for what is right and inspire the future generation to join us in our mission to peace.