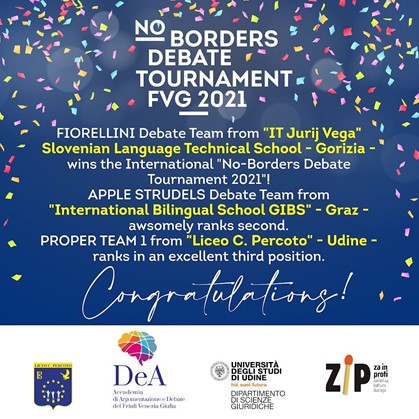 2 weekends ago GIBS Debate Club were at it again. We were asked to participate in an initiative organised by our Italian neighbours, the “No Borders Debate Tournament”, to promote debate in Italian schools. Debate in Italian schools is growing and developing and we were excited to be a part of supporting and collaborating with them on this project.

GIBS students Nathanial Guagy (6i), Una (5b) Šarić, and Valentina Stock (4b), spoke on motions related to advanced technologies, freedoms during pandemics, female quotas in the business world and limiting individual energy use.

We were proud and delighted when they made it to the final of this inaugaral tournament.

They spoke incredibly well and are excited to also develop a debate culture in Graz just like the Italians.