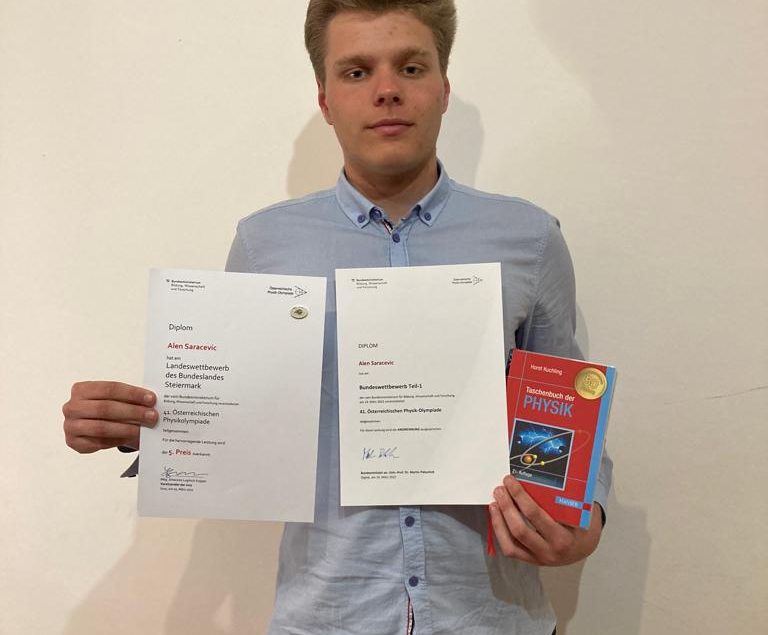 At the beginning of March, Alen Saracevic from 8B participated in the 41st Austrian Physics Olympiad Styrian Regional Competition and was awarded 5th place amongst over 40 participants. Due to his Austrian-wide ranking, he additionally qualified for the first round of the national competition.

At the Styrian regional competition, his knowledge of various fields of physics ranging from mechanics to optics was tested. In the experimental part, he had to measure the discharge curve of a capacitor, and in another task, he investigated the behavior of a solar cell under different levels of illumination.

On March 14th, Alen took part in the 41st Austrian Physics Olympiad Preliminary Round of the National Finals which took place locally instead of Linz as under normal circumstances. From the original 600+ participants, he was ranked 21st nationally and narrowly missed the qualification for the national finals.

During the five-hour competition, he had to solve a wide variety of theoretical tasks across almost all areas of physics from mechanics and electricity to thermodynamics, optics, and waves.

Some tasks included finding the speed of a supersonic jet from the angle of a visible sonic boom on a photograph. Further, Alen had to calculate the circular orbital velocity of the surface particles of a water wave as well as the number of molecules in a glass of water. He also had to determine the voice frequency range of giants as well as the delay of ultrasonic signals emitted by a hunting bat using the Doppler effect.