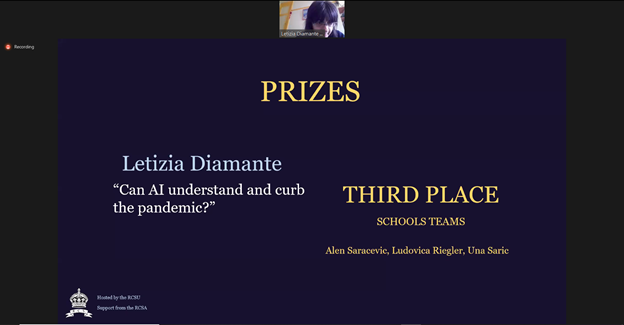 Ludovica Riegler and Alen Saracevic (7b) and Una Saric (5b) ranked 3rd from over 300 overall entries for their essay on Artificial Intelligence (AI) in pandemic management at the yearly Royal College of Science Union (RCSU) Science Challenge.

The RCSU of the Imperial College London hosts a science communication essay competition every year, with multiple prompts for both school and Imperial contestants. This year, four judges posed a total of seven questions, some of which were related to the global pandemic. The group wrote a 1200-word essay laying out the fields of application of AI in fighting the spread of SARS-CoV-2, in response to the prompt “Can AI understand and curb the pandemic?” They demonstrated the capabilities of AI and tackled tricky ethical questions about personal privacy.

The four judges were:

After being shortlisted in the selection process, they were invited to the Online Award Ceremony that took place on April 11th, where the judges announced the winners and gave individual feedback. They were excited to find out they were ranked 3rd for their category! The process of writing the essay taught them a lot about teamwork and they were honoured to see their efforts rewarded by a scientific expert, Letizia Diamante. Finally, they would like to give a huge thanks to the teachers who proofread their work which include Mr. Ó Cribín, Mrs. Kettemann and Mrs. Raposo who coached them to give their essay the final polish before submission!

They would encourage anybody thinking of taking part in a competition like this to just go for it! There’s nothing to lose in trying and you definitely learn during the process.

The essay can be read here: